Two from the night 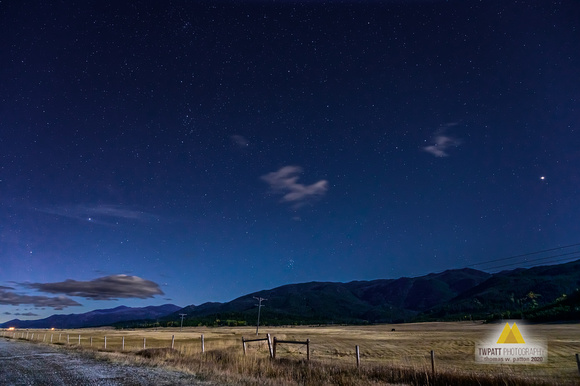 On September 28 we learned that a display of the aurora borealis (northern lights) might be possible and Mary and I headed out for a dark location with with a northern view, We drove north from Butte towards Elk Park on I-15 and pulled off at the Woodville Exit.

It was a beautiful clear night! An almost full moon (not good for northern lights, but beautiful anyway) was at our back and lit up the landscape. Mars (bright star at right in the photo) was prominent in the eastern sky.

Unfortunately the Kp value (a measure of how far south a viewable aurora borealis might be seen) which had been almost 6 earlier in the evening was now about 4. An aurora with a Kp of 4 might be seen on a dark night from places in far northeast, Montana, such as Wolf Point.

So as you might guess, Mary and I did not see northern lights on September 28. However, the clear night, bright moon, and lack of nearby lights helped us capture a moonlit view of a beautiful Montana valley. 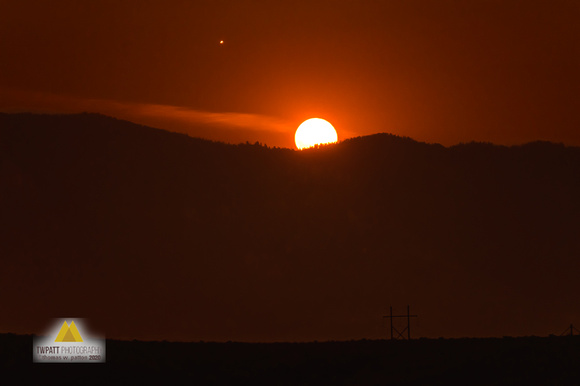 March 2 was a smoky, hazy, evening and also the night when mars and the moon would be closest together in the night sky.

Mary and I drove out on Little Basin Creek Road to a location where we could catch the mars/moon conjunction as it rose above the East Ridge.

The wildfire smoke created a truly spectacular dark 'blood' red moon and the moon's light was a purplish-red color across much of the eastern sky. The 'rising' of the conjunction was truly memorable.

The photo doesn't do the scene justice. Even through the smoke, the moon was tremendously brighter than mars and to capture both, I overexposed the moon. In doing so I lost its beautiful detail.

Human eyes can see about 24 'stops' of light (the difference between a really bright object and surrounding dim objects) and our brains can make sense of something as bright as the moon in the same scene as something dim, like mars. Our cameras can only differentiate about 8 'stops' of light, so if you expose for the moon, mars will be almost too dim to see. If you expose for mars, detail in the moon will be lost.

Nevertheless, this image give a good feel of what we saw.