On March 6, 2020 I drove the Biltmore Road (starts from near Twin Bridges and becomes Hogback Road when you near Glen, Montana). The road's western end crosses several thrust faults that place old formations on top of young formations. 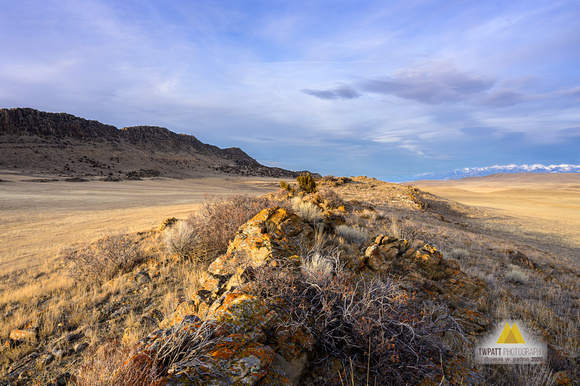 I stopped to catch a late day photo of lichen covered westward dipping gray limestone, most likely in the upper part of the Cretaceous Kootenai Formation. Because the limestone dips to the west, rocks in the photo farther to the left are progressively younger--all the way to the base of the large hogback in the left distance.

The hogback contains rocks millions of years older than the rocks in the foreground. How can this be?

A thrust fault along the base of the hogback provides a surface along which compressive forces pushed these much older formations eastward and upward over the top of the Kootenai Formation.

The Tobacco Root Mountains east of Twin Bridges, Montana, glisten in the distance and represent a much different geologic event.