It was a frustrating day!

Nothing seemed to go right. It snowed about 4 inches last night--actually snow is too good a word. White 'slushy' that is too heavy to move and that sticks to the shovel is what it was. It made you wish for the white fluffy stuff that will come with the COLD later this winter. Nevertheless, I got out early to shovel the walk for the high school kids who meet their bus on our corner. It's no fun stand in snow in the dark just to go to school.

Apparently it is fun to kick the snow out of the gutter back onto the sidewalk so that you and your compatriots can stomp it into ice...

The kitchen faucet began leaking onto the cabinet top and floor. I decided to take it apart, see what was with the seals, and rebuild it. The hot water shutoff valve broke in the on position. The cold water shut off valve worked, sort of. It slowed water to a trickle, but a trickle too much. Nothing for it then, we had to shut off the house and replace the valves. With that in mind, we decided that a whole new kitchen faucet with multi-sprays and a brushed nickel surface would be a good thing.

I shut off the water, opened valves upstairs and waited for the kitchen faucet to stop flowing. When the flow stopped, I removed the first connector hose and found that  the system was not fully drained. The garage donated a bunch of rag towels to wipe things down. 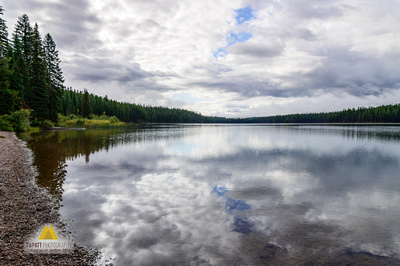 I got the new shutoff valves on, the cold side leaked. It only needed a little bit of tightening to stop the drop, but an entire turn to re-align it to where it needed to be... On the last push the wrench slipped and I chopped a large chunk of skin off my index finger. Four hours later, it is still seeping some.

Eventually, I got the new faucet installed and it appears to be leak free. With great faith and hope, I put all the innards back into the under sink cabinet,took the wet rag towels to the washer, and hauled the dry towels back to the garage.

It was a day of nothing quite going right...

So what's a fella to do. Just looking the sky reflecting in a mirror-like Lake Alva helps a lot. The water couldn't be quieter and the reflection less perfect. It just calms me down. Click the image to see it in the Montana Fall Gallery. THANKS FOR READING

Twpatt Photos
Weeellll! I really didn't mean to whine... But my finger really did hurt. :-). And we need to focus on the solution: calm, soothing, photographs of beautiful places.